Coop was a Cupid, a Messenger of Love and the husband of Phoebe Halliwell. The two of them have three beautiful daughters.

Cupids are a race of magical beings, associated with love, and tasked with helping people find it. In 2006, Coop was sent down by the Elders to help Phoebe repair her love life, as she had lost interest having given it up so many times for the greater good. To do so Coop gave her advice, and took her to the past to see her past loves - Drake dè Mon, Dex Lawson, Cole Turner, even her past life Pearl Russell's warlock seducer Anton - so that she could trust love again and see all of the happiness love brings. It was forbidden for Cupids to love just like it was with Whitelighters to date or marry their charges- little by little, they began to develop feelings for each other, but hid them to save themselves from the trauma Piper and Leo went through. Coop fell first, but continued setting Phoebe up with other men to make her happy until she told him it was him that she wanted.

However, the Elders made an exception for Phoebe and Coop due to everything they put her through over the years- though this wasn't discovered until it was explained by future Wyatt. As he said to his aunt and uncle, "It wasn't, and it will never be, a forbidden love." The couple was later married by an Angel of Destiny -- at the newly regained Magic School -- and were last seen rushing Phoebe off for the birth of their third daughter, while Billie tended to their two other girls.

Being a Cupid, Coop has a plethora of powers at his disposal, including Beaming, Immortality, Sensing, Suggestion, Empathy and Mind Transference.

In the series finale, future Wyatt and Chris tell Phoebe that in the future, all she needs to do is think about Coop to bring him to her, something that even retains in 2006, probably happened after they admitted their love to each other.

Coop's form of Teleportation, also known as Hearting due to how a small heart appears on his chest after his teleports.

Since Coop is an angelic being, he is an immortal; he will always exist and presumably never age.

With this power, Coop can sense the location of his charges, he can sense when two people are in love and can use it to teleport to the locale someone close to him is.

This allows Coop to project as an inner voice to his charges set them on the path to love; with this he can make a person realize their true feelings for a person. Similar to an astral projection but invisible to his charges he can follow them around implanting feelings of love in their mind.

Being Empathic allows the user, Coop in this case, to feel all the emotions an individual is feeling; He can feel the feelings of love, fear, pain, anger, rage, sorrow, disdain, and so on that an individual has in their head and in their heart.

After Paige Matthews worries about losing herself in her marriage to Henry Mitchell, she seeks advice and help from Coop. With a wave of his hand, Paige is magically transferred into the Henry's mind. When Henry would look in a mirror he would see Paige. Paige retained her powers while in Henry's mind and Henry could channel them, however, since Paige was in his head, the Power of Three would not work. Coop then separated the married couple.

Coop demonstrated that with his ring he possessed Chronokinesis, freezing time when needed and using it to travel through time to find love. In addition when trying to open Phoebe's heart to love, with his ring Coop was able to see how blocked Phoebe's heart really was. It should be noted that his ring probably has the same powers as the previous Cupids. The ring also has limited Projection powers. 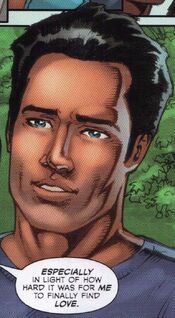 Coop has appeared in a total of 7 episodes throughout the course of the series.

Season 8
Engaged and Confused
Generation Hex
The Torn Identity
The Jung and the Restless
Gone With the Witches
Kill Billie Vol. 2
Forever Charmed

He has appeared in 2 comic book issues series so far.

Retrieved from "https://charmedlegacy.fandom.com/wiki/Coop?oldid=16988"
Community content is available under CC-BY-SA unless otherwise noted.