Melinda Warren, creator of the Halliwell family's Book of Shadows and mother of the Warren Powers of Telekinesis, Molecular Immobilization and Premonition, also owned an ornately designed glass cup with deep purple and gold decals around the bowl of the chalice. The design and overall shape of the cup was similar to that of a red wine glass.

At an unknown period of time, possibly during the late 1800's or early 1900's, the chalice found it's way into the hands of a Halliwell family member, possibly Penny Halliwell's mother, Priscilla Baxter's hands, who then stored it in the Attic of Halliwell Manor.

In 2001, when Piper Halliwell was about to wed her former Whitelighter, Leo Wyatt, her youngest sister Phoebe discovered the cup in the Attic of the Manor.[1] Prue shared her discovery of the cup with her sisters in the parlor of the Manor; Piper used it as the traditional "something old" memento to be part of her wedding.

The chalice was likely returned to the Attic afterward its use in the Halliwell-Wyatt wedding. 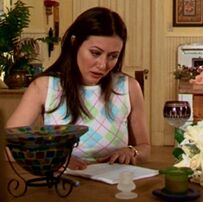 Prue with the cup on the table 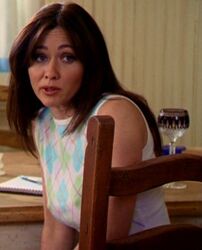 Retrieved from "https://charmedlegacy.fandom.com/wiki/Melinda_Warren%27s_Blessing_Chalice?oldid=4644"
Community content is available under CC-BY-SA unless otherwise noted.