A powerful clan of Demonic Generals who command the never-ending battle against the forces of Good. The Ordo Malorum will obliterate any and all good witches who protect innocent beings.

The Ordo first appeared in the year 2000 when Bane Jessup was imprisoned for his gang related crimes. While in jail, two demons posing as prison guards appeared in the facade of transferring Bane to another location, but Bane figured the two demons out and they attacked him with their Level Two Weapon. Bane managed to escape after one of the demons vanquished the other by shooting a beam from the weapon intending to hit Bane.

The demons were servants of the Orde sent to obliterate Bane Jessup for betraying the demon Litvack, a member of the Ordo. Bane managed to escape the two servants and later kidnapped Prue Halliwell in order to help him fend off the Ordo Malorum and destroy Litvack.

The Halliwell's Book of Shadows contains a two page spread on this insidious group of demons including illustrations of many of its members. The entry reads thus: 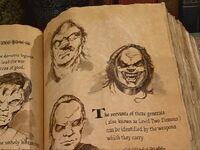 Ordo Malorum
Commanding the demonic legions,
these generals lead the war
against the forces of good.

To ascend in the unholy hierarchy,
they must capture and conquer
those witches who protect
the innocent and value good.

The servants of these generals
(also known as Level Two Demons)
can be identified by the weapons
which they carry.

Betty Reardon, a coordinating producer on Charmed, had her face be drawn in the Book of Shadows like many other crew members. She is the second demon on the left half.

Retrieved from "https://charmedlegacy.fandom.com/wiki/Ordo_Malorum?oldid=4696"
Community content is available under CC-BY-SA unless otherwise noted.